Parents want the best for their children.

One area where parents may want to help their children concerns U.S. immigration.

It could be that they want their children to be able to reside in the United States.

It could be that they want their children to be able to work in the United States.

It could be that they want their children to be able to realize other benefits in the United States, such as financial assistance for education (including financial aid and lower tuition).

Your child can realize these and other benefits by obtaining an IR2 visa.

This article discusses the subject of IR2 visa. 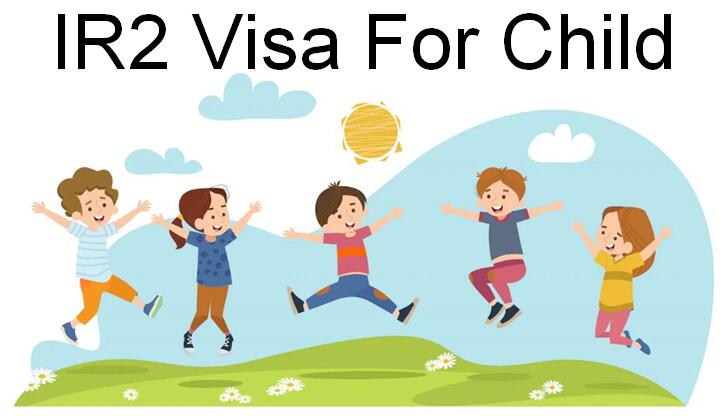 How to Obtain an IR2 Visa?

How Much Time Does It Take to Obtain an IR2 Visa?

How Much Does It Cost to Obtain an IR2 Visa?

Other Green Cards for Children

The IR2 visa is a green card in the U.S. immigration system for certain qualifying children.

The IR2 visa gets its name from its status for U.S. immigration purposes.

What are the eligibility requirements for IR2 visas?

There are four general requirements to be eligible for an IR2 visa.  Simply stated, IR2 visas are available for (i) unmarried (ii) children (iii) under 21 years of age (iv) of a U.S. citizen.

If the child is married (known in U.S. immigration terms as a “son” or “daughter”), the child cannot qualify for an IR2 visa.  However, as described below, such child may be eligible for a certain “family preference” green card.

If the child is 21 years of age or older (also known in U.S. immigration terms as a “son” or “daughter”), the child cannot qualify for an IR2 visa.  However, as described below, such child may be eligible for a certain “family preference” green card.

If the child’s parent is not a U.S. citizen, the child cannot qualify for an IR2 visa.  However, as described below, such child may be eligible for a certain “family preference” green card.

The key issue in qualifying for an IR2 visa is whether there is a qualifying child.  In addition to being unmarried and under 21 years of age (as described above), the child must be:

How to Obtain an IR2 Visa?

As with all green card applications, a specific procedure must be followed to obtain an IR2 visa.

The first step in an IR2 visa application is to prepare and file Form I-130, Petition for Alien Relative.

Documents to Submit with Form I-130

With the Form I-130, it is necessary to also submit certain documents, including:

If other forms of evidence prove inconclusive, the Petitioner may submit on a voluntary basis other evidence of a birth parent and a birth-child relationship, including DNA testing.

At DYgreencard.com, you can free check eligibility to see whether you are eligible to file an I-130 petition for your child. You don’t need to sign up, or provide any private information or credit card information.  Try it today!

Processing of an IR2 Visa

After the Form I-130 is filed, the processing of an IR2 visa will follow two different paths based on whether the child is then residing outside of the United States or in the United States.

If the child is residing outside of the United States, the IR2 visa is subject to consular processing. With consular processing, if USCIS approves the Form I-130, USCIS then sends the approved Form I-130 to the U.S. Department of State’s National Visa Center (“NVC”).  NVC will issue the child’s case a visa number and send the case to the applicable U.S. embassy or consulate in the country where the child is living.  As described above, unlike with other green card applications for children (as described below), because the IR2 visa is an immediate relative green card, there are no annual quota limitations, and a visa number should be immediately available for the child’s case (avoiding delays).

Under consular processing, the child then will need to pay Immigrant Visa Application fee and Affidavit of Support Fee, and then complete and submit Form DS-260, Application for Immigrant Visa and Alien Registration through NVC’s electronic application center.  After Form DS-260 is submitted, the child will be instructed to also submit various supporting documents, including passport , photo, birth certificate, police certificate if the child is 16 years of age or older. Form I-864 Affidavit of Support and its supporting documents are needed to be filed as well.

Under adjustment of status, the child needs to file Form I-485, Application to Register Permanent Residence or Adjust Status, with USCIS (USCIS handles adjustment of status processing).  Form I-485 requires various information about the child.  With Form I-485, the child also needs to submit various documents and other evidence, such as passport, photos, birth certificate, and proof of legal entry. Form I-864 Affidavit of Support and its supporting documents are needed to be filed together with Form I-485 as well. Another advantage of an IR2 visa application as an “immediate relative” green card application over other green card applications for children (as described below) is that it is possible to file Form I-485 at the same time as the parent files Form I-130, which is known as “concurrently filing”. Actually, it is highly recommended to file Form I-130 together with Form I-485 if the child is inside the United States. Concurrently filing will not only saving time but also avoiding an adjustment of status interview at a USCIS local field office.

With both consular processing and adjustment of status, the child also will schedule and complete a medical examination with an authorized physician (less extensive if the child is under 15) and be fingerprinted (if the child is over 14).

Under consular processing, the child should attend an immigrant visa interview at a U.S. embassy or consulate. At the interview, the child will be asked questions about the parent-child relationship to prove its validity. For any green card application, including for IR2 visas, the interview can play a critical role in determining whether the green card application will be approved.

How Much Time Does It Take to Obtain an IR2 Visa?

While every IR2 visa case is different, and individual circumstances will vary, the average time it takes to obtain an IR2 visa is estimated to be 6-24 months.

How Much Does It Cost to Obtain an IR2 Visa?

The following is a summary of the principal filing fees required in connection with an IR2 visa:

In addition, as obtaining an IR2 visa can require the help of someone who has prior knowledge, experience, and expertise with IR2 visas, it is recommended that an attorney or immigration consultant be hired to assist with the IR2 visa application.  The cost of suchan attorney or immigration consultant should be considered in determining the total cost to obtain an IR2 visa.

Other Green Cards for Children

These four visas, known as “family preference” green cards, fill in the gaps for children who cannot qualify for IR2 visas.

If the child has a U.S. green card holder parent and thereby cannot qualify for an IR2 visa, the child, if under 21 years of age, may be able to qualify for an “F2A second preference” visa.

However, it should be noted that it will generally take more time to obtain any of these family preference green cards than an IR2 visa (as an immediate relative green card) because these family preference green cardsare subject to annual quota limitations and generally do not offer immediately available visa numbers. For F1, F3 and F2B visa category, concurrent filing of Form I-485 with Form I-130 (under adjustment of status) is not available. For F2A visa category, concurrent filing is possible if the F2A is current according to the visa bulletin monthly issued by the Department of State.

At DYgreencard.com, we can help you prepare all types of family-based green card applications for your child at an affordable price, no matter you are a U.S. citizen, or a lawful permanent resident. All you need to do is just answer some simple questions and upload customized documents to our online platform. In addition, an immigration lawyer will answer your questions and review your application before its submission to USCIS. Learn more about what we can do for you.

There are many ways that parents can show their love for their children.  With the many benefits available to children who obtain green cards in the United States, providing your child with an IR2 visa can help your child for the rest of the child’s life.

If you are a U.S. citizen who wants your unmarried, and under 21 years of age, child to obtain a green card, you should consider the IR2 visa.

Who May File I-130 Immigrant Petition and Its Checklist

I-130 Processing Time-What Happens after Filing

What Happens after I-130 Approved?

Form I-485 Adjustment of Status, Explained

What Happens after Filing Form I-485?

What to Expect at an Immigration Medical Exam?

How to Get Birth Certificate that Meeting USCIS Requirements?

How to Calculate Child’s Age under CSPA?

Income or Asset Requirements for I-864 Affidavit of Support

DYgreencard is not affiliated with or endorsed by the United States Citizenship and Immigration Services (USCIS) or any other government agency. Blank immigration forms with written instructions are free to download at the website of USCIS.